A word of caution about wear 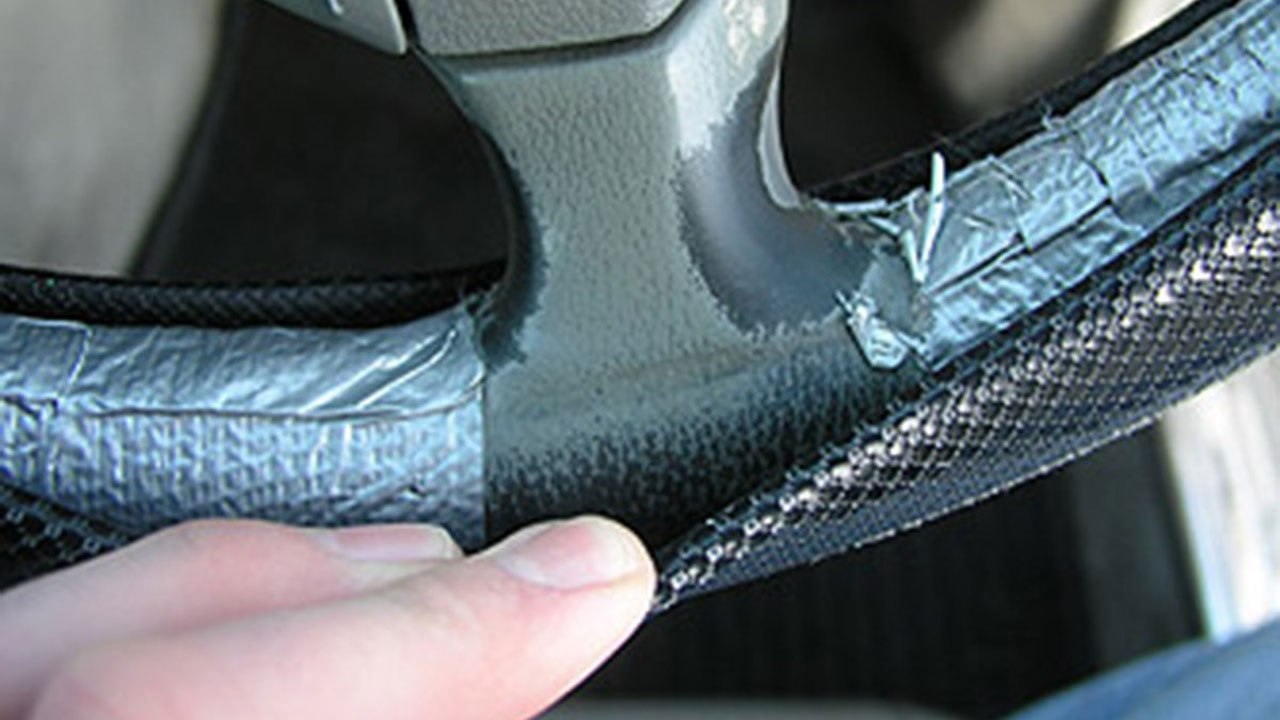 It's true that New Again can repair all kinds of minor damage and wear, putting it right and making a car look much fresher and newer. But did you ever stop to think what the wear on a car tells you? 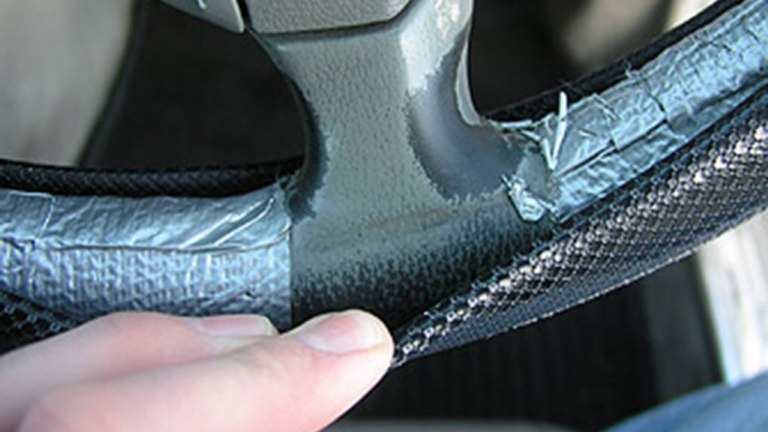 Worn steering wheel -- even though this can be fixed, this level of wear indicates that this Mercedes seems to have seen some serious use.

The mileometer can tell you fairly accurately how many miles a car has done, but it's the wear that will tell you what kind of miles the car has done. A car with quite high mileage, with lots of stone chips on the front, and minimal wear on the interior will have likely done lots of motorway miles -- which is no bad thing really. The car doesn't have to do too much work on the motorway.

But a car with fairly high mileage which had a worn steering wheel, worn rubbers on the pedals, thread-bare carpets, and worn seats, is likely to have done far more work in its lifetime. You have to ask yourself, 'Is the gearbox as worn as the gear-nob?'.

If you find a good solid car which is mechanically sound, but is cosmetically a bit scruffy, there is no doubt you can get it for a steal, spend some money tidying it up and end up with a vehicle that is worth a couple of thousand more that you spent. But this scenario really does depend on you finding a good, reliable car to begin with.

Unfortunately, few of us are qualified to pick the winners -- myself included! Personally, I'd hire the services of a professional buyer or consultant who charges a fixed price for finding and bidding on a car at auction. I'd tell him what kind of car I'm interested in (Saloon, people carrier, etc) and how much I have to spend on the car in total, including restoration, and he will make recommendations about specific models and specs. He will then give me a call when he sees something. How long it will take depends on how fussy I am. 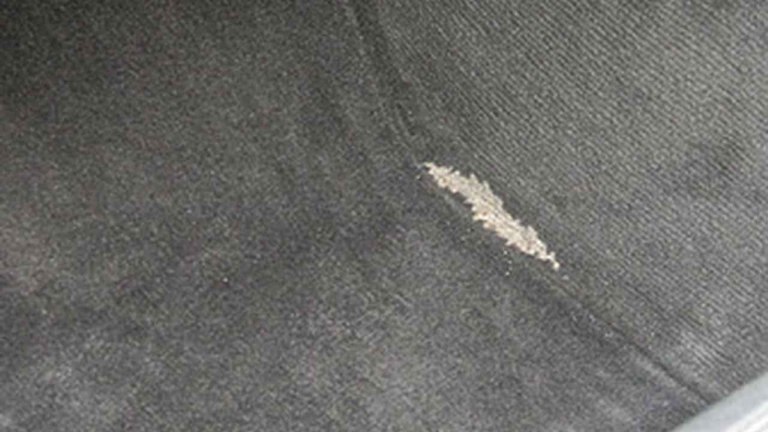 Worn carpet -- this isn't too bad. The carpet isn't threadbare despite the damage.

Luckily, I know an honest buyer who I can trust and there are others out there. As always -- if you can find someone that's recommended by a friend, that's preferable.

The other thing that you can do is research on the web -- read the car reviews. Of course, virtually all the reviews of new cars come out fairly positive because, with few exceptions, cars are pretty good when they are new. You really need to be looking on websites like Peach or Lemon, or car forums. Cars do go wrong, and there will always be somebody who will shout loud about their problem, but look for patterns -- if there are lots of people complaining about the same expensive problem, you know to stay clear. On the other hand, you may find that the problem is a cheap and easy fix, but it's best to know before buying a car.

There are lots of car buying guides and advice pages on the internet, read as many as you can.

Cars like Ferraris and even Porsches can often show a lot of wear around the driver's area, but this isn't a sure fire indicator that the car has had lots of wear on the road. Being low down and fairly cramped, they can be hard to climb into, which can cause additional wear on seats. And people do like to sit in them. If you own a super car, you like to show it off, so it's likely that just about everybody you know has had a sit in it.

Take an Expert With You

Finally, before buying a car, get it checked. Make sure the car isn't stolen, there is no outstanding finance, and that the car isn't a write-off - a few pounds spent here could save you lots of heartache.

Have somebody who knows about mechanics look at the car. At the very least, pay to have an inspection done, but it is preferable (and probably cheaper) to take along a friend who knows their way around a car.

And don't forget to check for signs of wear and ask yourself what that wear tells you about how the car has been used.

Here are some more of our latest #ModernCarRestoration blogs 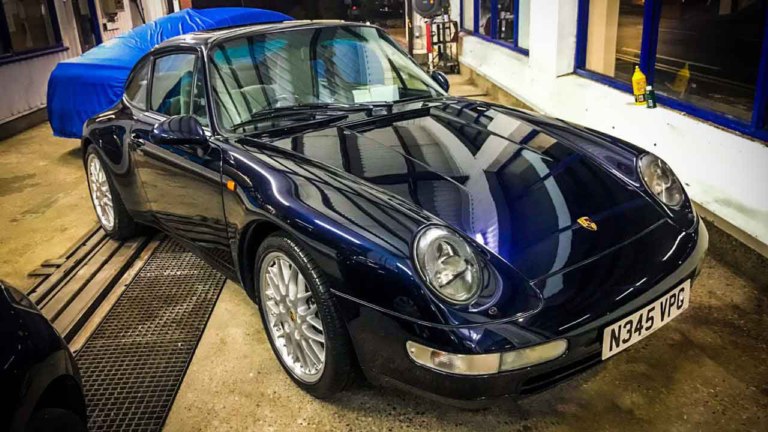 This Porsche Carrera came to us for Modern Car Restoration, it had some rust on the rear end and required some quite serious bodywork. But that's not what's interesting about this Porsche! 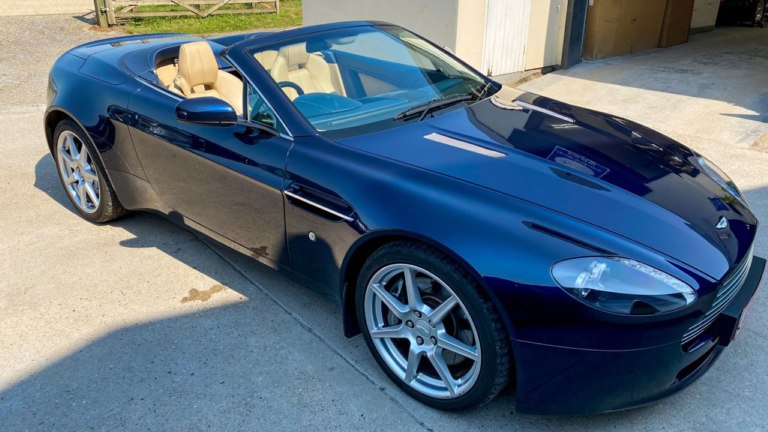 A behind the scenes look at the kind of work we do at New Again in Modern Car Restoration. This car has been sitting in storage for five years and is in need of some attention.