A behind the scenes look at the kind of work we do at New Again in Modern Car Restoration. This car has been sitting in storage for five years and is in need of some attention.

We will show you from our video footage how we went about rejuvenating this car to suit the customer's needs and wishes.

For whatever reason it had been stored away for at least five years until put up for sale when it was noticed by our customer who decided it was a gem and would make a wonderful weekend toy.

Every car has a story, this car is no different although we are a little sketchy of the details for this one. Every customer has something different they are trying to achieve. Each unique situation dictates how we approach the car.

This Vantage is mechanically sound with no major bodywork damage but it does have a lot of cosmetic issues which we will cover as we go along.

The car was assessed and we made recommendation as to what work we think should be done. Sometimes more issues are revealed as we move along with the work, the customer is kept informed at every stage, often by video. These are clips we sent to the customer.

It needs to be said; if our customer had an endless supply of money, he probably would have gone out and bought a new Aston-Martin for a weekend toy. If asked, we could make this car exactly like new, probably better than new. We could repair or replace every part of the car that had the slightest sign of wear, but that's not the goal here. A complete restoration would be very expensive.

Our aim is to repair what needs to be repaired to make it look like a car of it's age which is well maintained, in good condition. To be presentable, not best in show.

We evaluate the car, let the customer know what we recommend, give them the choice as to what they want done, what they can live with, what they could do at a later date. We inform them of likely prices before we get started so they can weigh up what is worth doing and what might be left for another day. The customer is in full control over where they want to compromise. The car doesn't need to be perfect, it just needs to make the customer happy... after all that's what's really important. 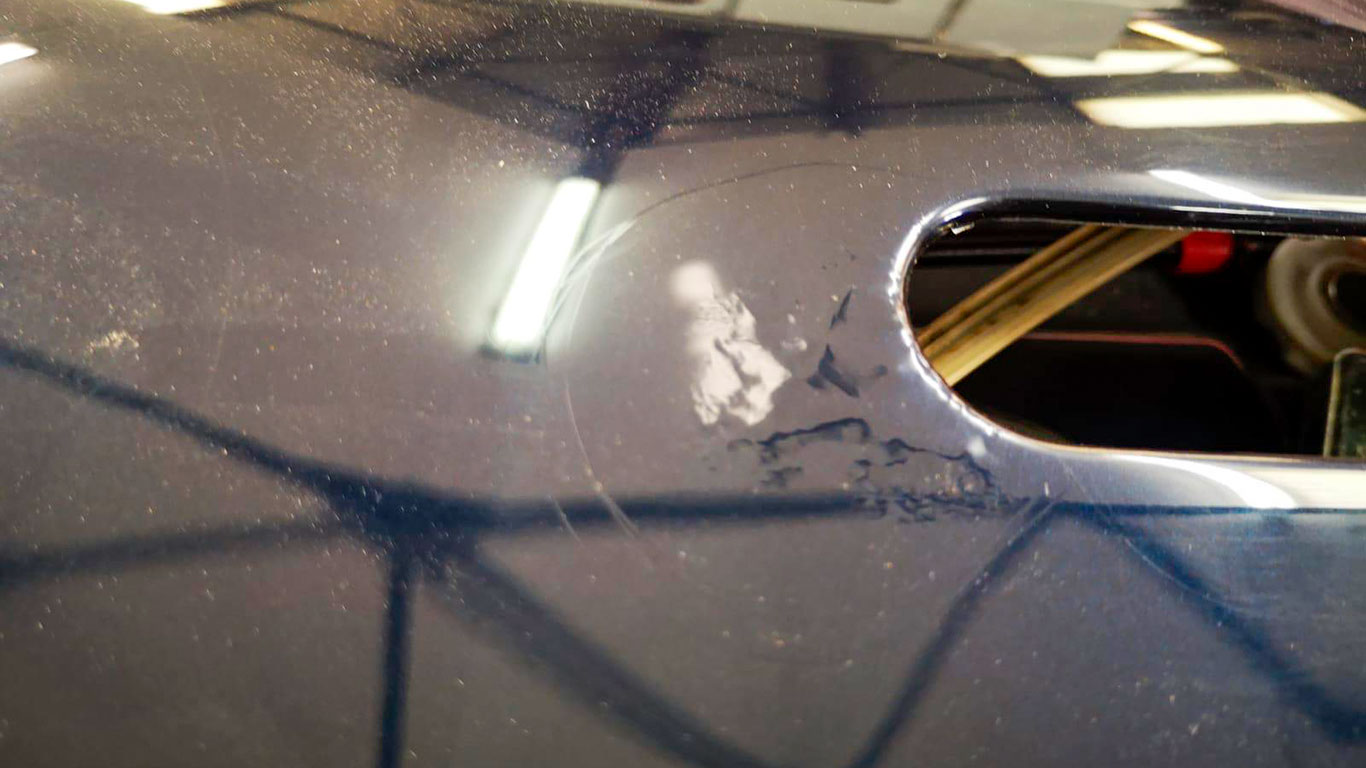 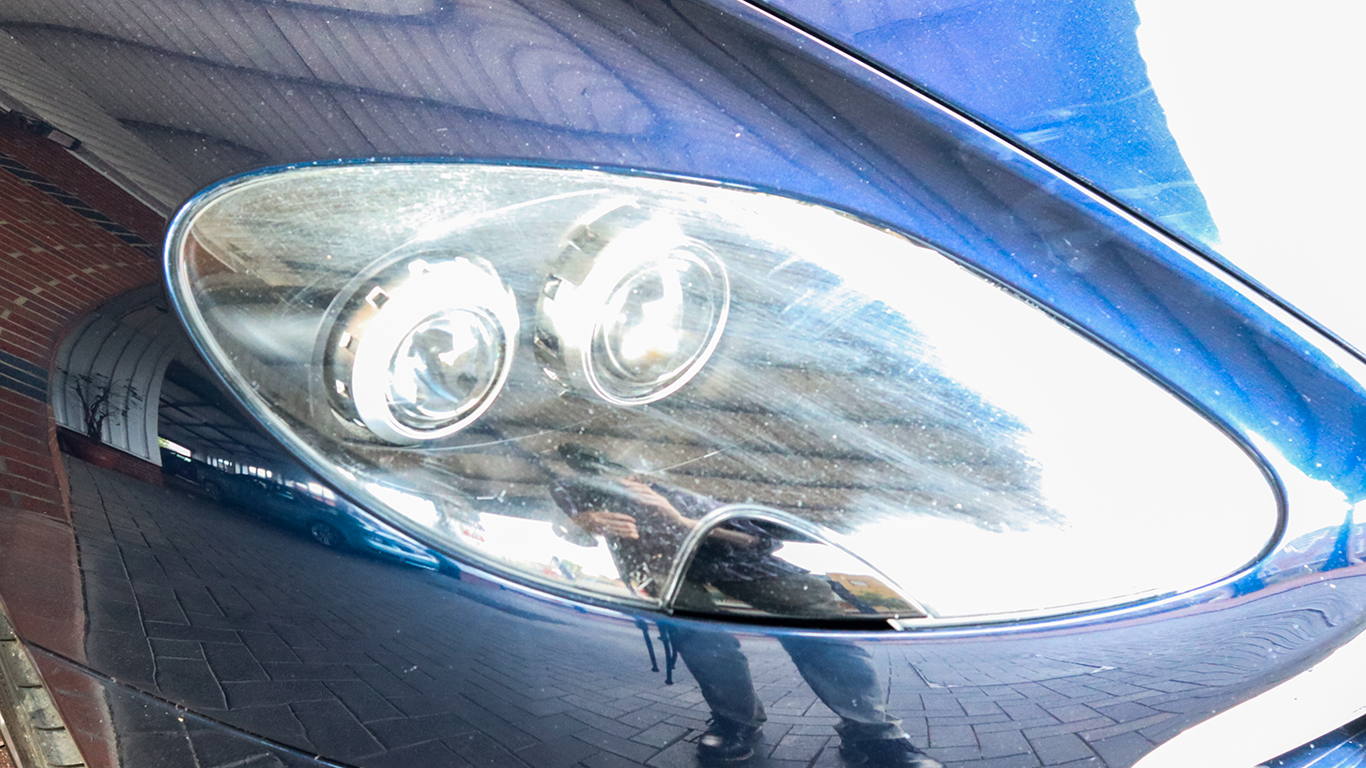 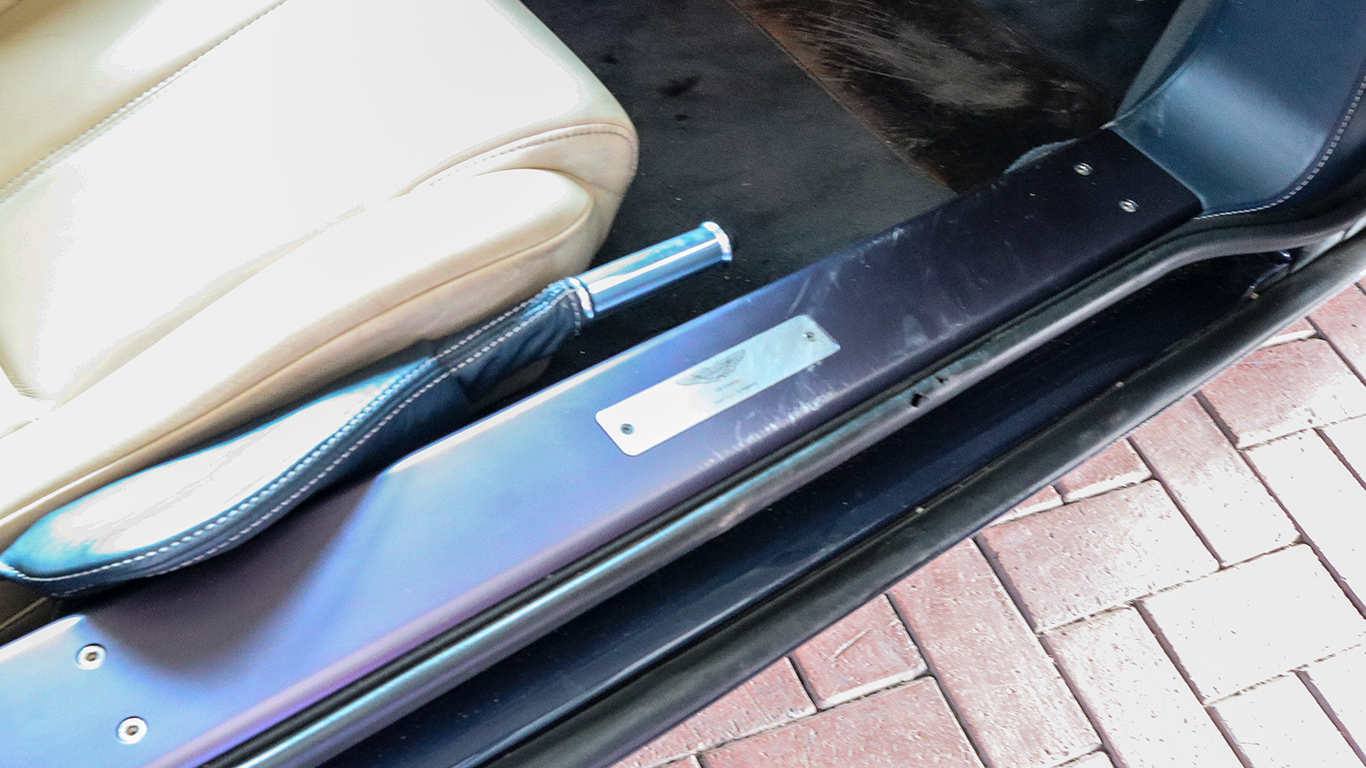 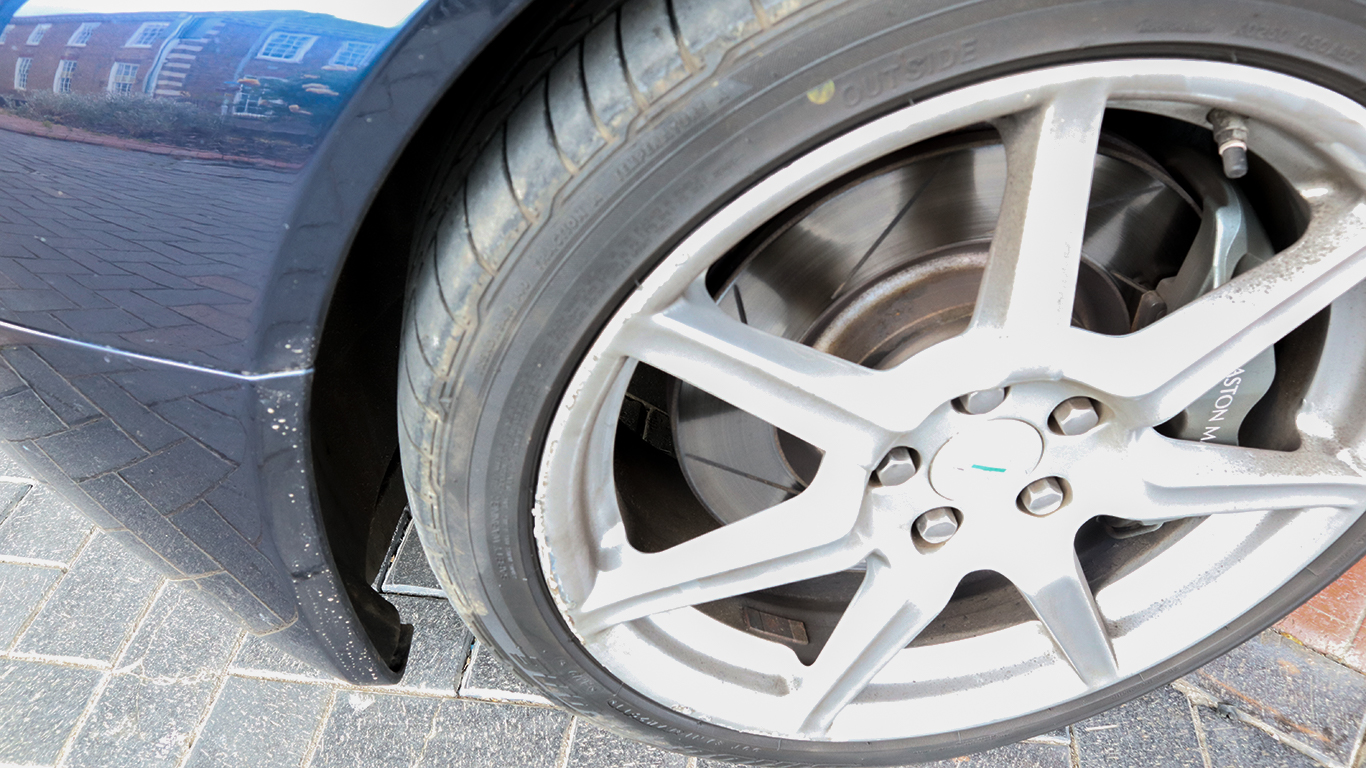 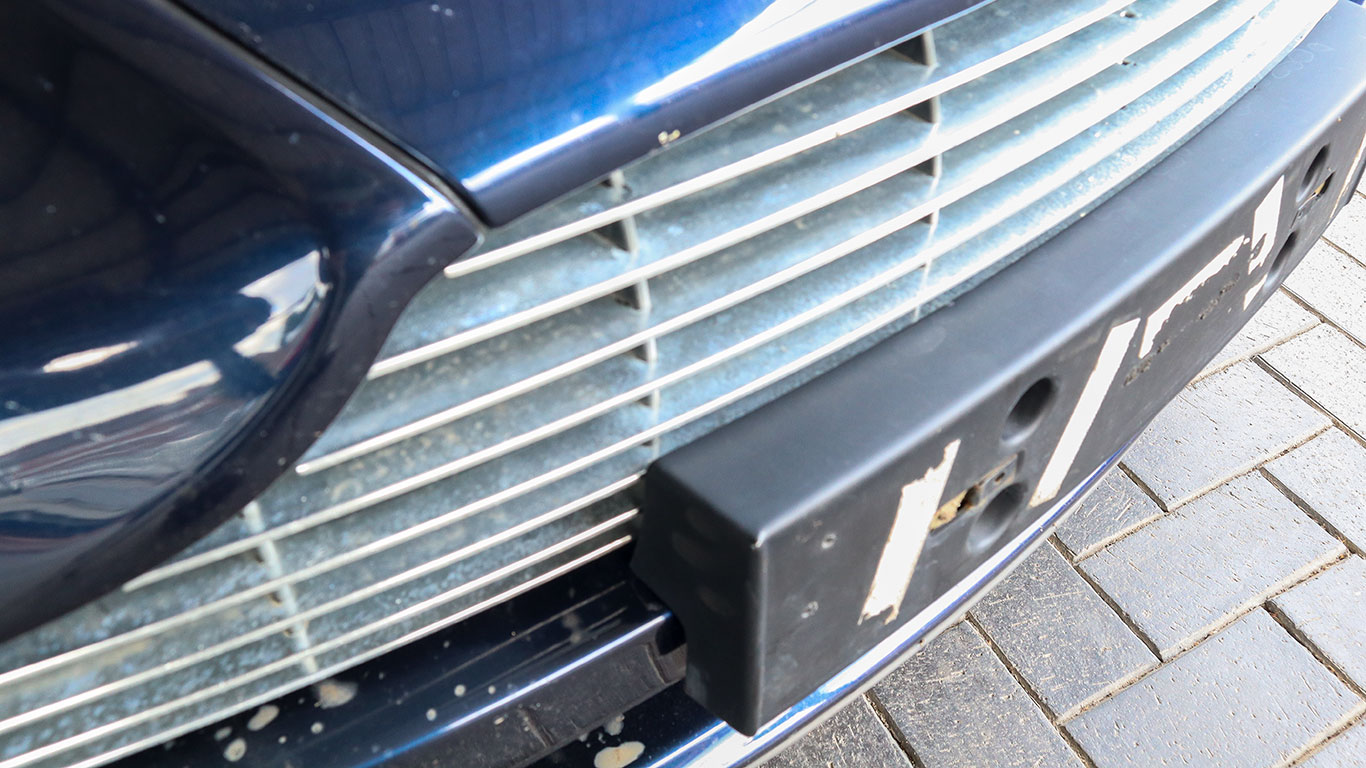 Mostly minor cosmetic damage but the corrosion on the doors is a more serious problem. 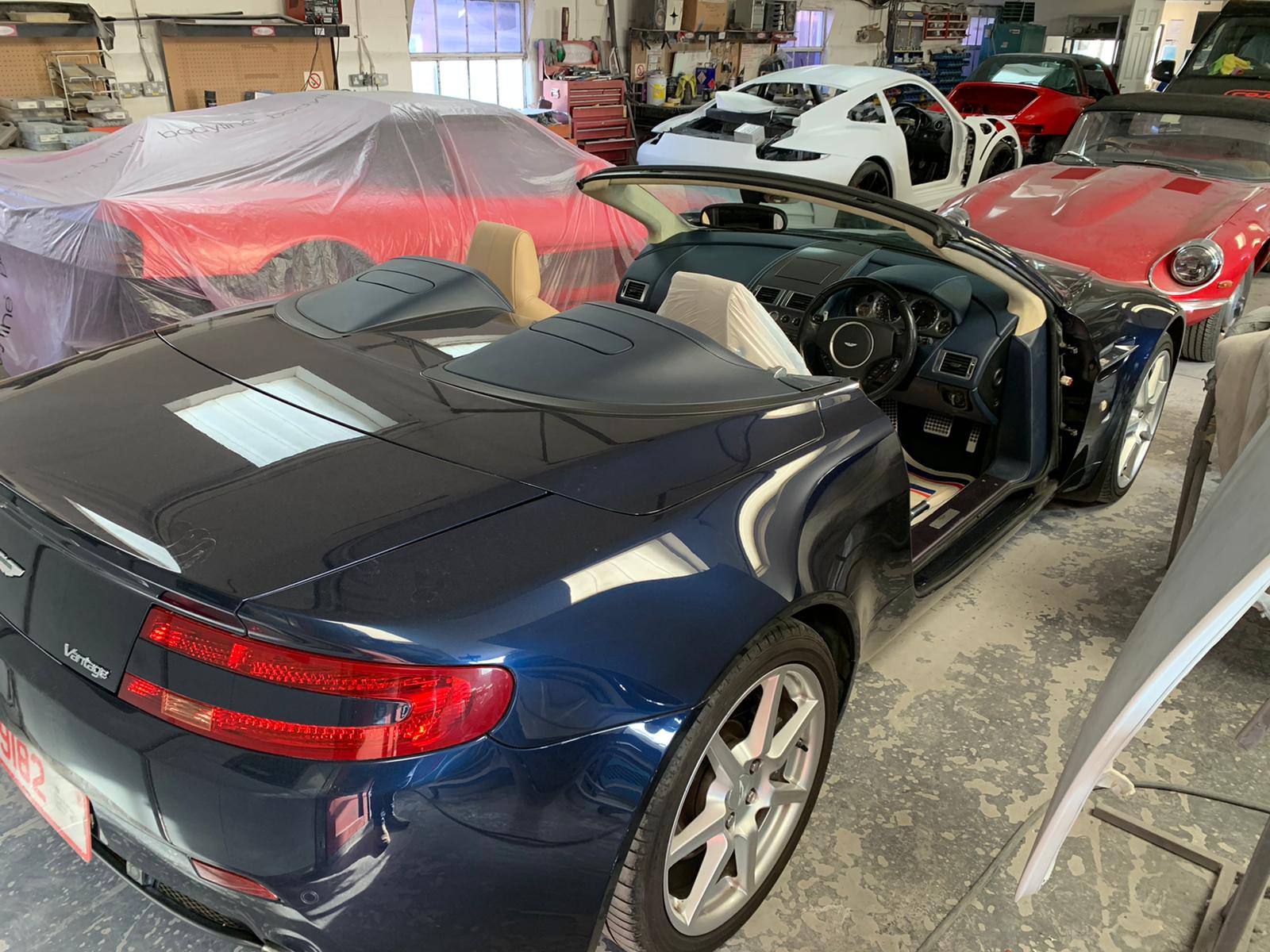 The Aston in with the Porsches, Ferrari and Jaguar at the paint shop. Kraftwork specialises in this kind of restoration work on modern and vintage sports cars.

Off to the Body Shop

We began work almost straight away, cleaning the hood and polishing the headlights, but the most important job was to the two doors repainted to get rid of the corrosion.

You can't do these things by half, especially with such a lovely vehicle. The door has to be repainted and then faded out into the wings. There are some people that will tell you that on such a small area you can have a smart repair, painting a patch just where the damage is, but this seldom ever works. Even from the factory, paint will vary from batch to batch. So many things effect the paint from temperature, humidity to the static electric charge of the vehicle, all of which can effect the colour of the paint and make it look slightly different. There is also the fact that you are putting new paint next to paint which has been on the vehicle for years and exposed to the sun's UV radiation causing some pigments to fade. So in short you can get very close, but you will never get an exact match so the answer is to blend the paintwork by fading out,

The Aston went off to Kraftwork and had both doors repainted and the wings blended in.

The body shop we always work with for these projects is Kraftwork Vehicle Refinishing. We have been working with them for many years and they are experts in this kind of restoration. They will strip down a vintage sports car and repaint from a bare body shell... which is a little further than we usually go with our Modern Car Restoration.

With the corrosion removed and the doors repainted, we can work on the rest of the paintwork to remove the scratches which on this vehicle were fairly bad. Not the worst we have seen by any means, but bad enough for us to do a couple of extra passes with a heavy cutting compound.

Many years ago, we made our name doing paintwork correction. It is possible to go at a car panel-by-panel, wet-sanding it smooth and polishing it to a mirror finish which is far shinier than the factory finish. There are now a number of people doing this in the UK, making videos of the wonderful jobs they do of Ferrari, Lamborghini and posting amazing photos on instagram. We can still do this, but just because you can, doesn't mean you should!

The problem with that level of paint correction is that while it is great on new cars which already have near perfect paintwork, for older cars which have picked up a few dings and scrapes, giving the car a mirror finish just highlights any imperfections. While it's always nice to be able to give 110%, some cars are best polished to 90%.

In this case, life was made easier because several panels had been repainted, however we did have to do a lot of machine polishing starting with a fairly heavy cut, and the bonnet and boot had a few areas where wet-sanding was required to remove deep scratches. Once polished, the car was finished with a Matrix Blue Ceramic Coating. This gave a wonderful finish and really brought out the blue colour. A glass coating is incredibly tough and now that we have polished the car to a high gloss, the glass coating will help to keep it that way.

We took the car to Ultimate Alloys to have the wheels refurbished. They only had a few minor scrapes but refurbishing the alloys probably makes more difference to the appearance of a car than anything else. We recommended that the wheels could be finished in a different colour. A darker grey has a tendency to make the car look a little more aggressive which is no bad thing on an Aston-Martin. So the wheels were refinishes in gun-metal and the centre-caps replaced to match. One of the nice things about refurbishment is that you can make a few chances which make the car your own.

Make do and mend.

At some point this car had been "cleaned" with extremely harsh chemicals which had stained the grill, it had also been scrubbed with something which scratched up all the paintwork and some of the glass, which is a lesson to us all about who we trust to wash our expensive sports tourers!

We took the grill apart and found the missing centre strut stuck behind which was a stroke of luck. With the grill in pieces James was able to use a heavy cutting compound to machine polish the grill until it looked like new. We never got as far as talking to Aston-Martin about a replacement grill but you can probably bet that they would ask a small fortune. On cost alone it's always better if we can repair the original parts.

There were also black plastic grills front and back which once we cleaned we found to be faded and stained. This was easily fixed with a coat of matte black paint.

The rubbers around the boot didn't fit properly in the boot. They had been taken off, maybe to run a radio lead through and while off had shrunk. We reconditioned them with a product which plumps them up and they popped back on. The rubber on the driver's side had a couple of holes which we filled in with Innotec rubber filler.

The back bumper had a bit of a bulge on top and didn't fit perfectly, but it wasn't too bad, as the saying goes, "you'd have to be looking to see it". It's something which could be done at a later date if the customer finds it annoying. This bulge appeared to be where the plastic bumper hung on the brackets so was something that could be done with paintless dent repair.

Something which the customer did seem to find annoying was the anodized tread plate which had some scuffs and scratches. There are a number of possible solutions to this, you could take them both off and give them a painted finish, or you could buy a replacement, either way it's going to be fairly expensive. But what we can't do is polish it out or paint it in. It's something which the customer can decide to do at a later date should they choose to.

Finally there were a couple of snags in the leather. Leather Car Seat Restoration could have been done but there were fairly minor. When you are climbing in and out of a low sports car, you will tend to cause wear to the seat bolster and little scuffs and snags do happen.  There is a reasonable chance that at some point in the next few years the bolster will need Connollizing, and the centre console can be done then.

There is no law that says you have to have all the work done at once!

Cars like this are not so unusual. In fact, the fella who made the delivery mentioned that he had a Porsche as a weekend car but he had just sold it because he just didn't get the time. People do buy sports cars as a luxury, especially convertibles, put them in a garage and rarely used them. After a few years of them sitting gathering dust they decided to sell. If you are lucky you might find one that just needs a little attention, if you do, bring it to us because we love working on them.

We do lots of Porsches, lots of Porsches, Aston-Martins, Jaguars, the occasional Maserati, as well as an assortment of desirable German saloons and Japanese sports cars. These types of cars have a high residual value and are always sought-after, so as long as they are mechanically sounds and have good body-work they are well worth doing.

For work like this, our customers come to us from all over the UK, Channel Islands and a large part of Europe, so if you have a car that you would like us to make a project of, we would love to talk to you.
Alternatively, if you are in the Essex area and just want crash repair or wheel refurbishment, you can go direct to Kraftwork Vehicle Refinishing or Ultimate Alloys.