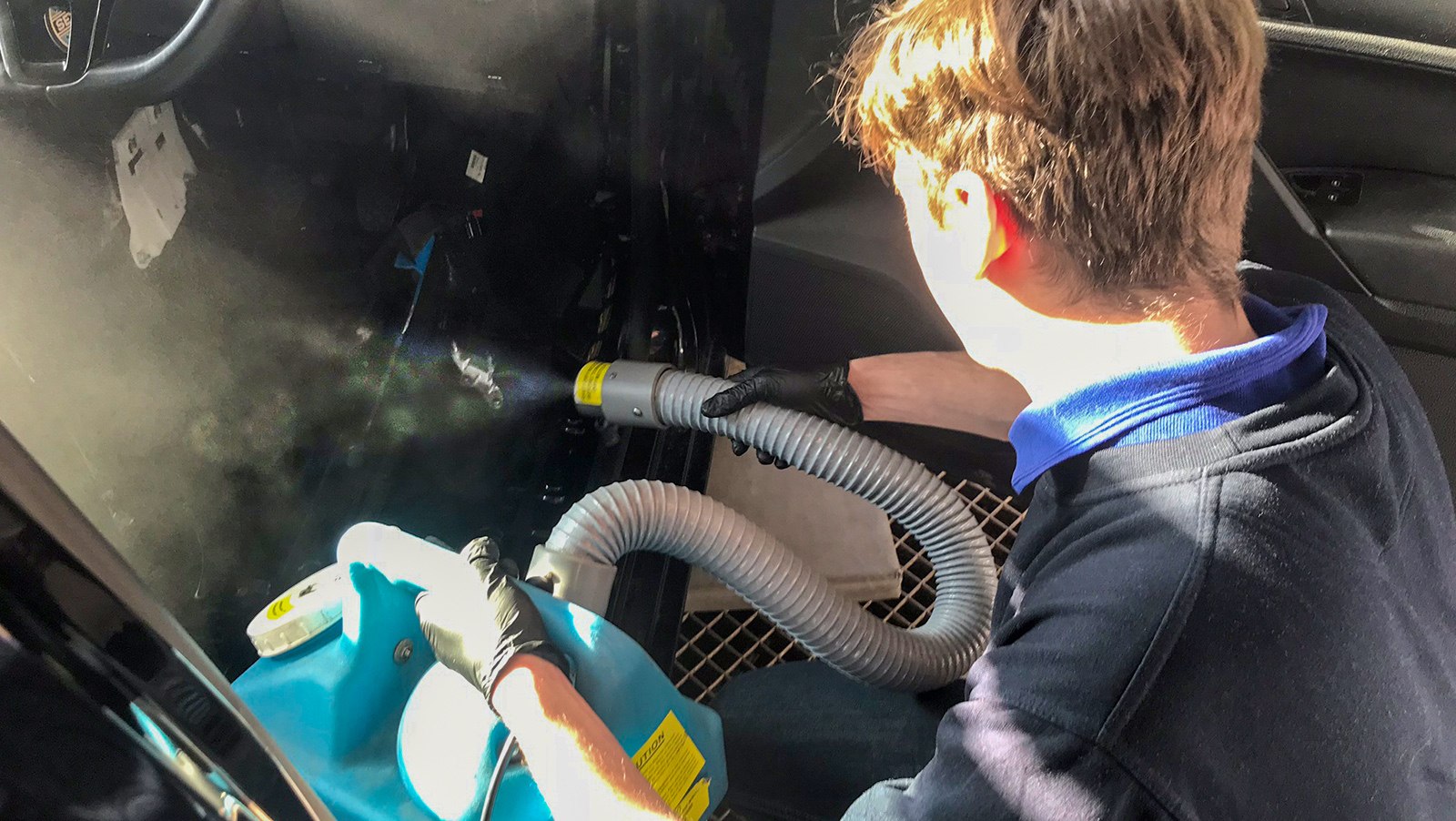 Do you have a car that has been smoked in? Does it have a distinctly doggy odour? We can remove the smell of damp, mould, pets, cigarettes and make your car smell fresh and new again.

We have over 35 years experience in removing stubborn car smells and have worked with all the major car insurance companies to provide an expert car odour removal service which they can rely on.

We can remove persistent smells because we understand the problem. Usually the smell has a single source, if you can locate the source and remove it, you will often have removed 90% of the problem in one go.

Odours are very tricky to remove because although we might kill the bacteria, unless we completely remove the source of the smell, they are likely to return. (This is probably why spraying around your favourite air freshener didn't work as advertised.) Things become more difficult if you have just bought the can and don't know where the spillage was.

We can locate and remove the source of the odour, and then we have a wide range of products which eliminate the smell of cigarette smoke, pets, damp, mould, food and drink, including milk and other unsavoury substances.

Some cars can be more difficult than others, depending on if the source is localized or if contamination has spread throughout the entire car. Please watch the video to learn more.

*For specialist machines and products such solvents and enzymes. Normal materials/sundries are included in the hourly rate, e.g. detergents

Upgrade and only pay the difference

We try to recommend the correct service for every problem. However, odours can be very difficult to deal with, but don't worry, if the service you choose doesn't succeed you can upgrade to the next, and you only pay the difference.

Put an Odour in Your Car

Some services above leave your car with the odour of our cleaning products, and while they are designed to be pleasant and fresh, you may prefer the odour of your choice.

"It's made all the difference, no wafting or musty smells any more. Cant recommend highly enough, and can breathe easy again." ~ Sunil

We have an article with a full FAQ about car odours which answers all your questions.

What do you do that's different to the other companies I have tried?

What makes us different is that we are professionally trained for odours. Many car valeting companies will shampoo your seats and carpets, then put an odour bomb in your car that they got from their valeting supplier. While this can work, it's a limited arsenal.
The equipment we use is the same as would be used by specialists who are cleaning houses, hotels and hospitals after fires, floods and other mishaps. We have spent years cleaning up accidents and odours for insurance companies including hazardous materials, and have had to learn to deal with everything from fuel spills to black mould.

My car just smells 'off', will a good clean freshen it up?

A good clean is usually the best start for removing smells from a car because if you don't get rid of the dirt, you can't get rid of the smells. Disinfecting and deodorizing your car will typically get rid of stale mild odours, with the added benefit of making it safe. Our treatments kill 99% of germs.

I am sensitive to some cleaning products, is there anything you can do?

This can tie our hands a little, but we can try to work with you. UV, Ionizing and Ozone don't use any chemicals, enzymes may be safe to use, and there are some natural products that are effective such as Sodium bicarbonate.

The previous owner left a smell of body odour, can you get it out of my seats?

We can do a lot to remove odours like this, persistent smells in leather can be difficult, but anti-microbial and pairing fog should do the trick.

What Our Customers Say

Below are a selection of comments from some of our satisfied customers.

Adam Ford
I drove the car away relatively confident the smell has gone and can safely say that as of 23:19, some 6ish hours later, the car smells just fine. Fingers crossed it lasts! In summary: brilliant place, great service, fair pricing and very thorough good workmanship. Definitely recommended.

Debbie Reece
Excellent advice and service. I brought my mini cabriolet to New Again as there was a reoccurring mould problem inside the car. Gary and his team did a fantastic job of removing, cleaning and most importantly treating the mould to make sure it would not come back. Very happy with their service and so glad I found them.

George Stergioulas
We had our family runaround fully detailed and disinfected inside in light of the arrival of our newborn son. We were given multiple options and they made sure the chemicals used would be safe for baby.
After getting the car back, I must admit I have never seen the interior so clean ever before...

Lily Edwards
Their services were fantastic and better than I could have hoped for, the car looked amazing in the end! They took care of all the mess on the upholstery, the spills, the smell, and even the scratches on the outside. In my opinion, they are absolutely worth every penny. ~ Google

Paul Brand
The smell was awful and the car almost un-driveable. Gary at New Again explained in great detail how they could help me and thank goodness I went there because the smell has gone. Great work lads, very professional in all dealings with me and highly recommended.

Sunil Patel
Its made all the difference, no wafting or musty smells any more. Cant recommend highly enough, and can breathe easy again. ~ Google

Joshua Holland
Very Professional service. End result was what I hoped for and Gary and staff were great to deal with.

When bringing your car to New Again, we often ask you to explain exactly the reason for having your car Protected, Detailed or Repaired. Once we understand exactly what it is you are trying to achieve, we will appraise your vehicle using our detailed appraisal check-sheet allowing us to identify areas of concern and tailor specific services that match your requirements and budget.

We use ozone machines to decontaminate all surface areas. These machines were often used in hospitals to sterilize surgical theatres and we originally used medical grade machines although we now use purpose built industrial machines which are far more efficient.

Ozone is an unstable form of oxygen with an extra molicule. When it touches something else, whatever it touches tends to steal the additional oxygen molecule turning the ozone into oxygen and oxodizing whatever it was that was touched.

There is ozone in the air around us all the time and increasing the ozone in the air effectively speeds up the ageing process for smells. As it touches particulates it oxodizes them and turns them into something else. This is very useful in odour elimination as it can get to places we can't reach. As an example, if your car has been smoked in and everything is coated in a thin layer of tar, it will be coated over every surface, coating all the wires and connectors behind your dashboard, it would be cost prohibitive to take your dashboard out and clean it wire-by-wire, but ozone can get up under there and hit that tar making it inert.

How does an Ionizer work?

An ionizer sends out negatively charged ions which bond to airborne particulates and pollutants causing them to drop out of the air. This cleans and purifies the air of dust, smoke, bacteria and mould spores.

Ultra Violet radiation does kill germs, bacteria and even viruses… so it is useful in removing odours as it kills any bacteria in the air and it’s bacteria which often causes odours.

This works a little like a disco smoke machine, it heats a special liquid and turns it into a warm fog. We have we have purpose made machines which allow us to run a selection of different chemicals through them which because they form a dense fog can get into every area.

What do we mean by Bio-Active?

Essentailly we mean enzymes which are designed to break down a wide range of organic compounds and engineered to operate at a wider temperate than normal. Often it's bacteria that causes odour and bacteria needs to eat something. Our enzimes will get their first and munch up any food source causeing bacteria to starve to death... then the enzymes will eat them too.

We have a range of products which are anti-microbial, anti-bacterial, anti-fungal, etc. All of them are pretty devistating to unseen nasties that cause odours, but we have special ones aimed at particular problems for example cars with mould in them. The latest products are especially aimed at killing viruses.